Here’s a way to introduce English Literature in the classroom:

(adapted from an assignment by the great Jeffrey Leathem, a colleague in my department!!) 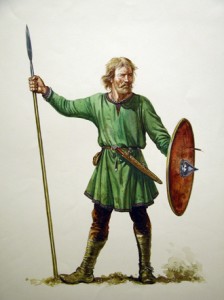 We’re going to do a little old-fashioned chest-thumping Anglo-Saxon style.

Your boast should include the following elements:

B. Your immediate ancestry and something about your lineage

C. Boasts of at least three past achievements and/or hobbies

D. Boast of an achievement to come

E. Include at least three identifiable kennings (Identify in margin)

Hail young thanes who gather about me –
For I am GG, dweller of the creek.
From the land of Lincoln, here in Chicago.
Daughter of the late RC, chief motivator of the crowds,
And N, seller of homes. Sister of D,
Online gamer consult & seller of homes.
From the high plains I come! I roar!
Reader of books, dancer of songs,
Scribe of stories, and essay-assigner.
Commander of the hardwood battlefield,
I approach my foes and float on them with the
Fine fin, wading through water,
Snapping waves, watching for whacks from my foes.
I speak of and boast of the victories of the
Blue and White Small Bear Warriors!
And how ‘bout those Blue and Silver Boys?!
I stretch with force forming a fine angle –
Blasting my limb-movers and walking-propellers with
Momentous endurance.  Defeating my enemies.
Flying on the human-kite at 1300 ft. above ground.
Pale-hosed, I prepare the fire feast – The great celebrations.
Under sweltering sun in the flame’s face.
I barbecue the grub –Party Host Champion I am hailed:
Planner of Surprises!   Host of many!
A challenge is decreed by my heir –
I am  healer of wounds, listener of qualms,
Helper of homework, preparing the way for
My heir to this mighty mead-hall.
I’ll make good on my boast and talk all the louder –
Poets will celebrate my actions with rousing cries,
Shaping my deeds into timeless songs.

As I encourage my students to take part in our school’s summer reading program, I can’t help but remind them that their […]

I splurged on composition books for each student in my reading classes this semester; to begin, I am asking students to bring in (or […]

Need some inspiration during these last few days before Winter Break?!  While the following post does not give the NCTE 11 session, […]

Humane or Insane?! – My Skunk Stay

Quote Of The Day

Trust is not built in a day but we can lay bricks every hour.

Some Advice on Advise